Spanish and English are similar languages. This is good news if you teach Spanish speakers. Your students have an advantage many English language learners don’t have.

In this article, I’ll cover six tips for teaching English to Spanish speakers. These tips will help your students (a) capitalize on the similarities between English and Spanish, and (b) lessen negative transfer from Spanish to English.

1. Show your students the thousands of words they already know

Two great resources for this:

For practice, have students translate Spanish words to English by following the rules in the first PDF. Students will be surprised to learn how many English words they already know.

This practice exercise contains over 50 examples of English to Spanish false cognates. See the first section of this guide for Spanish speakers for an explanation of the false cognates used in the exercise.

3. Target the phonemes Spanish speakers have difficulty with

The circled phonemes tend to give Spanish speakers difficulty. 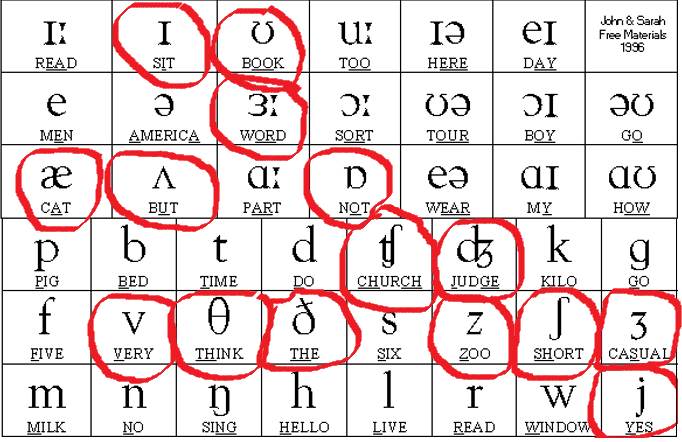 4. Teach that English is stress timed and Spanish is syllable timed

Here is a video from Rachel’s English about English as a stress-timed language.

Stress-timed languages are difficult for Spanish speakers because:

Teach your students that they shouldn’t expect every word to be stressed in English. As far as speaking goes, tell students to emulate the rhythm and intonation of native speakers, not just the pronunciation of individual words. You can also teach this lesson on reductions.

Spanish speakers struggle with conciseness. Spanish doesn’t use possessives, and instead relies on prepositional phrases. For example, in English we might say “Attached are the Q4 figures we reviewed in last week’s meeting,” but the literal translation from Spanish would be “Attached are the figures from Q4 that we reviewed in the meeting from last week.” The direct translation is too wordy.

This error correction exercise contains 100 common mistakes Spanish speakers make in English. It’s a long exercise, and should be divided into chunks. For an intermediate group, 10-15 could be used at a time (perhaps as a board race or other interactive activity). Explanations of the mistakes can be found in this guide for Spanish speakers.

To conclude, it’s always a good idea to consider your students’ native language when planning a lesson. This way you can anticipate any issues students might have with the material. If you don’t know the language, you can always solicit the help of a coworker or friend.

What about you? Do you have any tips for teaching English to Spanish speakers? If so, please leave a comment below.